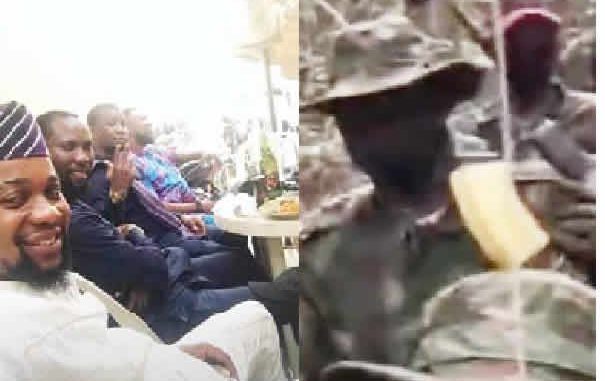 ABEG.NG gathered that the victims attended a wedding in Ibadan, Oyo State, on Saturday, and were returning to their base in Lagos State on Sunday, when one of the vehicles conveying them to their destinations broke down on the road.

One of the victims, Folahan Akinsola, who spoke to our correspondent on Monday, said they were attempting to tow the faulty vehicle when the kidnappers struck.

“We went to attend a wedding in Ibadan on Saturday and lodged there after the wedding. The following day, as early as 5.30am, we started our journey to Lagos State. We moved in a convoy of three vehicles, including two Toyota Corollas and one Toyota Camry.

“I was in the Toyota Camry ahead of the two other vehicles and we were trying to overtake a truck on the expressway. But as our driver overtook the truck, we zoomed off and had moved quite a distance before realising that we could not see others coming behind us.

“So, we turned back and drove against traffic to search for them. We later found them by the roadside around the Isara area. One of the drivers of the Toyota Corolla, Shola, said his car developed a fault. We were cutting the seatbelt of his car to use as rope to tow the vehicle to somewhere safe when four armed men came out of the bush and kidnapped seven of us.”

Out of the seven abducted victims, Akinsola said three persons were released, as the hoodlums demanded N60m ransom for the others.

“The kidnappers were all dressed in Army uniform and commanded us to enter the bush. They were more than four, as there were some of them inside the bush. They took some personal belongings and set some of us free.

“I was part of the people that were released and we were told to go and raise N15m to secure the release of each of the remaining four victims. So, we are to raise N60m and that is why we are seeking help from Nigerians as these kidnappers said they will waste them if they don’t get the money.

“After we regained our freedom, we called 911. We were driving back to Ibadan when we met some metropolitan policemen and also reported the case to them. But we were told that the case was not within their jurisdiction. We were referred to the Isara Police Division.

“We later reported the case there and got to know that the Divisional Police Officer had mobilised about 25 policemen to the scene of the incident. These kidnappers have been sending threat videos showing us our friends in their custody.”

ABEG.NG gathered that two of the victims work with the Nigerian Council of Registered Insurance Brokers.

The spokesperson for NCRIB, Tope Daramola, confirmed the incident.

“Two of our junior staff, Shola Olawuyi and Adeola Bude, were involved and effort is being made to ensure that they are released.”

The state Police Public Relations Officer, Abimbola Oyeyemi, said the state Commissioner of Police had visited the crime scene for an on-the-spot assessment.

“The anti-kidnapping unit has been there since yesterday (Sunday) and the Commissioner of Police was there today (Monday) to have an on-the-spot assessment of the whole situation and to give the necessary directive.

“So, we are on it and very soon, we are having the hope of rescuing the victims alive. The purpose of the kidnap is to siphon money from their family members; it is their regular trademark.

“It was an opportunistic crime because our men are always on that road, but unfortunately, the vehicle conveying those people broke down along the road and the hoodlums took advantage of the situation to strike.”