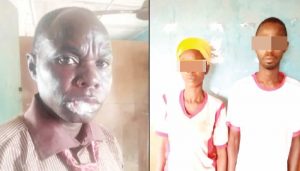 A man identified as Oyedele Nutai Joseph with his wife, Elizabeth has been arrested by the police for invading Toyon High School Ere Village in Ado-Odo in Otta Local Government Area of Ogun State with thugs, leaving an atmosphere of fear and apprehension in its trail.

The thugs in the service of the said couple attacked a teacher, Abel Thomas, for beating their son, Joshua Joseph, an SS3 student of the school.

The suspects were arrested on Tuesday by police operatives from Ado- Odo Divisional Headquarters after they had received distress calls from the school that parents of one of the students had stormed the school with thugs who attacked the teacher and injured him.

The Police Public Relations Officer (PPRO) Abimbola Oyeyemi, who disclosed this to reporters yesterday said: “Upon the distress call, the Divisional Police Officer (DPO) for Ado-Odo, Arowojeun Michael led his men to the school and arrested the couple but their accomplices escaped.

Oyeyemi, a Deputy Superintendent of Police (DSP) said preliminary investigation revealed that the teacher Abel Thomas moderately corrected an SS3 student of the school by the name of Joshua Joseph who then went home to inform his parents that he was beaten by the teacher.

According to the police spokesperson, having heard from their son, the couple felt that the teacher had no right to beat their son. They mobilised some thugs, stormed the school descended heavily on the teacher and injured him on the mouth in the process.

“The assailants also damaged the back screen of a Toyota Corolla with registration number LSD 395 FV belonging to another teacher of the school Jolayemi Sunday.

“The injured teacher had been taken to hospital for treatment. The Commissioner of Police Lanre Bankole has ordered that the escaped thugs who accompanied the couple to attack the school should be hunted for and brought to justice. He also directed that the arrested couple should be charged to court without delay,” Oyeyemi said.