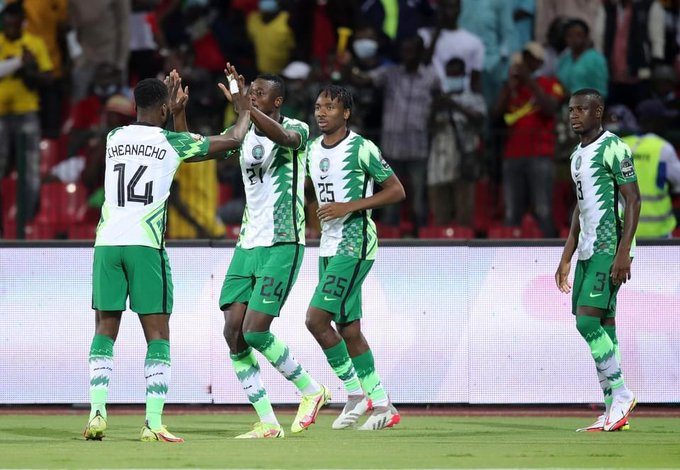 Nigeria defeated Guinea Bissau 2-0 in their last Group D match at the Africa Cup of Nations on Wednesday in Garoua, Cameroon.

William Troost-Ekong scored Nigeria’s second goal against Guinea Bissau after a sensational dribble by Moses Simon in the 75th minute.

Simon’s shot hit the bar after he dribbled three opponents before Ekong scored from the rebound.

Sadiq Umar scored in the 56th minute to put Nigeria ahead in the game. He scored through an assist from Kelechi Iheanacho.

Both teams created good chances but failed to score in the first half.

Sadiq Umar missed what should have been the first goal of the game in the 24th minute.

In the 15th minute, Semi Ajayi also missed a goal by nodding above the goalpost.

With the victory, Nigeria are the only team that reached the last 16 round winning all group matches at the 33rd AFCON.

Guinea Bissau’s hope to reach the last 16 failed after losing to already qualified and top of the group Nigeria.

Although they came to the tournament with many absences and technical changes, Nigeria’s Super Eagles established themselves as one of the favorites with an outstanding performance in their first two matches.

A convincing victory over Egypt, followed by another against Sudan, ensured the Super Eagles qualified as the top of the group, regardless of the outcome of Wednesday’s match.

This is the first encounter between Guinea-Bissau and Nigeria at the Africa Cup of Nations.

Guinea-Bissau are winless in their nine matches in the Africa Cup of Nations (D3 L6).

Nigeria have won 12 of their last 14 Africa Cup of Nations matches (L2), including both in this year’s tournament so far.

They last won each of their opening three matches of an edition back in 2006.