11 Arrested Over Murder Of Monarch In Ogun 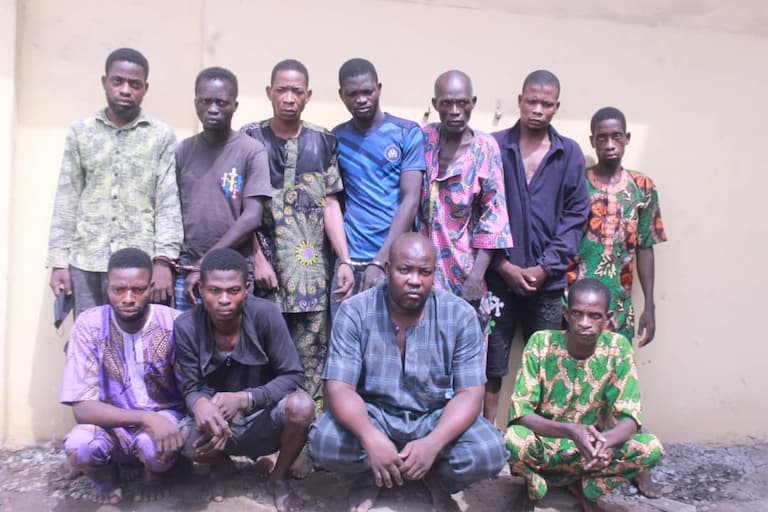 Eleven suspects who allegedly participated in the murder of a traditional ruler, Adetola Olajide Ayinde, the Olu of Agodu town in Ifo, Ogun State, have been arrested.
After killing the deceased, the suspects allegedly set him and his vehicle ablaze to avoid traces.

The Assistant Inspector-General of Police (AIG), in charge of Zone 2 Command, comprising Lagos and Ogun States, Adeyinka Adeleke, on Monday, paraded the suspects in Ogun State.

Giving an account of the incident, the AIG said on January 28, 2022, the zone received a petition from one Odetola Okuribido, on behalf of the entire Okuribido Royal Family of Agodo town, Ewekoro Local Government Area of Ogun State.

Adeleke said the petitioner alleged that on Monday, January 24 2022, His Royal Highness, Oba Odetola Olajide Ayinde, the Olu of Agodo town in Ifo LGA. Ogun State was murdered by one Gbeminyi Sotade aka Okon and his cohorts.

He said on the day of the incident, the late traditional ruler went to his village to clear the grave of his late brother, and that all of a sudden a group of hoodlums numbering about 50, led by one Gbeminiyi Sotade, allegedly attacked the monarch, while three of his relatives were assaulted with machetes.
According to him, the hoodlums pushed the traditional ruler into his red Toyota Sienna SUV 2016 model with registration number APP 55 GF and was driven away by one Agbara, along with other hoodlums to a nearby forest.

He said while inside the forest, the hoodlums poured petrol on the victim who they (the hoodlums) had locked inside before setting him ablaze.

He identified the three people who narrowly escaped death as Alfa Wahab, Deborah Onilere and Lydia Odetola.
“Eleven suspects have so far been arrested and they have confessed to their involvements in the crime.

“When they were asked why they attacked and murdered the traditional ruler, they claimed the deceased was Ajagun-gbale, also known as land grabbers.

“Meanwhile, efforts are at top gear to arrest others at large.
“The general public is hereby advised and warned to desist from taking the law into their hands by involving in any form of criminality as whoever is caught up on the wrong side will face the full wrath of the law,” he added.