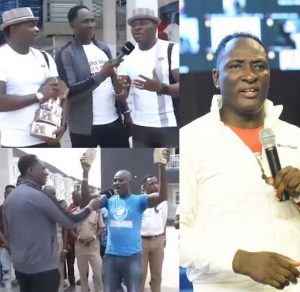 “General Overseer of the Christ Mercyland Deliverance Ministry in Warri, Delta State, Prophet, Jeremiah Fufeyin has given over N10 million cash gift to some families following the worsening hardship in the country.

The fund was provided through the Jeremiah Omoto Fufeyin Foundation, a subsidiary of the prophet’s church, which had reached out to many Nigerians particularly some ailing celebrities in recent time.

According to a video posted on the church’s official Facebook page, one of the beneficiaries, who received N1 million said he had contemplated committing suicide after his many attempts to finance his wedding failed.

“My plan was to kill myself because I have tried but the people I know could not help me. I know many politicians in this country but they didn’t help me,” he said.

Similarly, upcoming artists, the Mamuze brothers, who received N2 million, revealed that it was not the first time that they are benefiting from the prophet’s gesture.

They called on other well-meaning Nigerians particularly religious leaders to emulate the prophet.

Speaking during a church program, the popular clergy noted that God has only blessed him so that he could also be a blessing to others, saying it is important to reach out to people in need especially those working hard to make a living.”