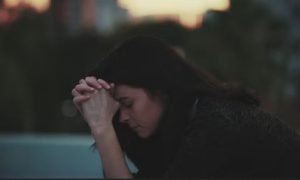 “A South African lady identified as Buya Madikizela, took to social media to disclose that her man was always stealing money from her and giving it back when to her as his own.

She shared her experience while responding to a tweet that said; ”Ladies, when did you realise “hmmmm nah he gotta go”.

According to Buya, she realised that he had been stealing from her, so she devised a way to prove it beyond reasonable doubt and broke up with him afterwards.

So the young lady marked 20 Rand note with it and as expected, he lifted the money. However, the most shocking and interesting thing happened later, which was that he gave her that same money as transport fare back to campus.

She wrote; ”Realised he was stealing money from me so I marked a R20 note with ink and left it in my bag, he gave it to me the next day to catch a taxi to campus.”

He acted like a gent paying for most things kanti I’m low-key contributing yherr!😠” 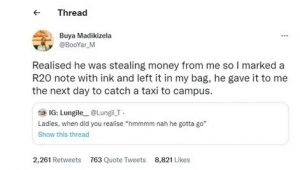