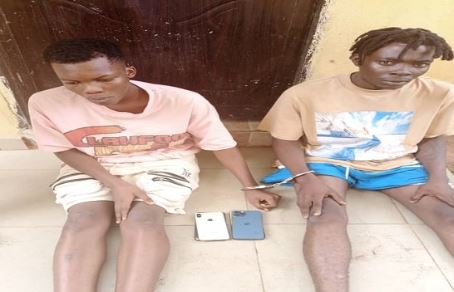 Two suspected fraudsters have been arrested by the Edo State Police Command for allegedly sending fake bank credit alerts to local traders after purchasing their products in Benin City.

The suspects, Rich Kelvin, 24, and Clinton Odiase, 19, were arrested on Thursday, 17 March, around St. Saviour Road after a reliable tip-off.

The fraudsters went to a shop along Forestry Road in Benin and bought an iPhone worth N700,000 and another unnamed phone worth N200,000.

The fraudsters posing as genuine customers requested to pay via bank transfer and asked for the business’s bank details.

Kevin and Odiase told the businessman that the transfer might be delayed after making a fake credit alert.

The fraudsters showed the businessman a debit transaction on his bank account to validate their dubious transaction.

Narrating his ordeal, the victim who is not named for security reasons, said:

“I am really shocked how the two guys were able to manipulate their phones. I saw that the amount had been debited from their account. I later got to know after the bank confirmed to me that such an amount did not enter into my account. I want the police to thoroughly investigate these two men as they should be charged for stealing.”

One of the suspects said,” This is the second time I am doing this kind of a thing. I am a fashion designer at St saviour Road in Benin city, and my friend taught me how to issue a fake Bank credit alert to buy expensive items”

Spokesperson of the command, SP Bello Kontongs, who confirmed the arrest, assured that the two suspects would be profiled to know if there are other traders who have fallen for the antics of the two suspects.