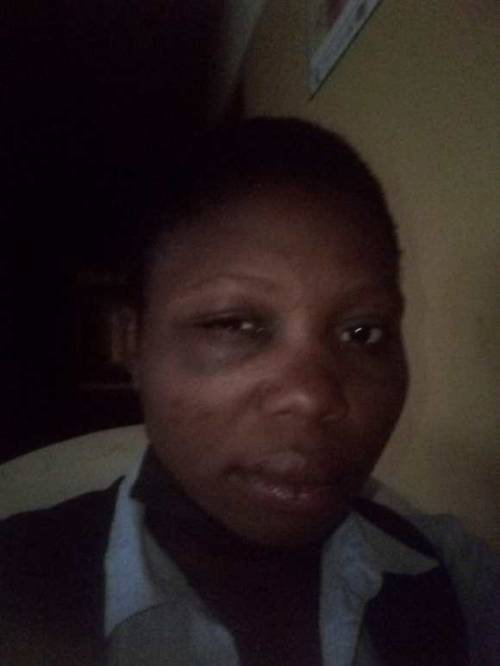 Franca Agada, a Nigerian woman, has lamented the maltreatment she suffered from two police officers, Inspector Danjuma Yaro and Inspector Christopher Ashim, for entering the Kafanchan Police Barracks on March 11.

In an interview with FIJ, Agada said she had just concluded a meeting with a senior officer at the barracks and was on her way out when the duo accosted her and beat her up, leaving her with eye injuries.

According to her, Inspector Yaro first accused her of passing through the barracks, and as she tried to explain why, he threatened to beat her up for having the courage to talk to him.

Ashim reportedly intervened, asking her what the problem was, and as she again tried to explain by addressing Yaro as “this man,” trouble started.

“As he heard ‘this man’, he got angry and pushed me. I fell to the floor. When I tried getting up, the two of them slapped me several times on my cheeks. I told them that they didn’t know who I was and they said they would know who I was,” she narrated.

She said she called the officer she came to meet and he stormed the scene in annoyance. The duo apologised to him on learning that he was a high-ranking officer.

“The officer I came to see then took my picture to the station, but those at the station could do nothing because a DCO (Divisional Crime Officer) was there. The DCO said he had no right to handle the case. He suggested I go to the hospital. But as I was about to leave, a police officer asked me for money to buy fuel. I told him I didn’t have money.

“At the hospital, I paid for the card and drugs. I did not know the conversation the police had with the nurse, but she prescribed Vitamin C and two other drugs. I got them for N200. When I went back to the police station, they collected the hospital card from me,” she said.

According to her, the drugs the nurse prescribed for her caused her discomfort as she was not able to sleep on the night of the incident. She called a friend to find out what could be wrong as the drug also gave her a bad breath, but the friend asked her to go back to the hospital.

Upon her return to the hospital, her card was nowhere to be found. She said after a doctor examined her, he remarked that the drugs she was given were detrimental to her health.

The young woman decried how her assaulters were roaming free on the streets while she continued to suffer in silence.