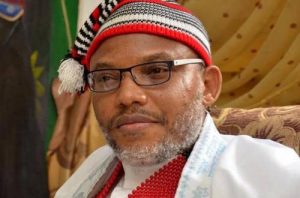 ABEG.NG reports that the Coalition of South East Youth Leaders, COSEYL, the umbrella body of all youth groups in the South-East geopolitical zone, has issued a warning to the Department of State Services, DSS, to stop the alleged torture of Nnamdi Kanu, leader of the proscribed Indigenous People of Biafra, IPOB.

The coalition stated this while reacting to reports in some sections of the media, alleging that the operatives of the secret police subjected the IPOB leader who has been under their custody to some forms of torture.

A statement issued and made available to journalists on Sunday by the President General of the coalition, Goodluck Ibem, urged the DSS to respect the fundamental rights of Kanu.

The statement reads, “If the news making the rounds is true, we call on the DSS to stop any form of maltreatment or torture of Nnamdi Kanu and respect his fundamental human rights.

“The South-East zone is highly tensed up and any action on the part of the DSS to further heighten or increase the already volatile security situation in the zone will not go well for the country.

“Torturing Mazi Nnamdi Kanu is counterproductive and will lead the country to a serious security quagmire if not stopped immediately.

“It is very unfortunate that millions of Nigerians are dying of hunger, starvation, poverty and poor medical healthCare on daily basis and the Nigerian government is busy spending huge resources on just one man.

“We call on the federal government to tell Nigerians how much resources have been spent so far in the court appearances of Nnamdi Kanu.

“Nigerians will be shocked to their marrows how much has been spent so far for his court appearance despite the fact that we are in a very difficult economic situation”.