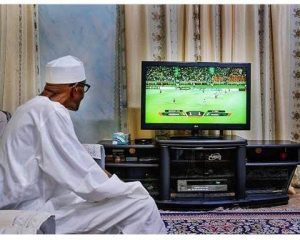 “Nigeria’s number one man, President Muhammadu Buhari stayed away from the Super Eagles Clash with Ghana on Tuesday at the M.K.O. Abiola National Stadium after he was warned of an imminent bomb attack, according to a memo from the State Security Service, SaharaReporters reports.

The memo on March 28 first shared on Twitter by journalist David Hundeyin warned of an imminent threat blamed on suspected elements of the Indigenous People of Biafra, a group the Buhari regime has blamed for all degrees of security crisis in recent months.

“The attack was hatched to target the return world cup qualifiers match between Nigeria and Ghana, aimed at causing maximum casualty and embarrassment to the Government, thereby drawing local and international attention to the secessionist agenda of the dissident group.

“In view of the foregoing coupled with the planned attendance of President Muhammadu Buhari (GCFR) and other important dignitaries to honour the national team, there is the need for adequate deployment of counter security measures before and during the slated match with a view to preventing, detecting and neutralising the threats,” the memo said.

The president was initially billed to be amongst the audience for the live World Cup qualifier between Nigeria and Ghana in the Nigerian capital.

But on Tuesday, he instead sent a delegation after the stern warning from the DSS.

“He didn’t attend the match in person. He sent a delegation from the presidency. When his name was announced, Nigerians in the stadium booed him,” a spectator at the stadium confirmed to SaharaReporters.

A spokesman for the SSS did not immediately return a request for comments.

It came as bandits continued their reign of terror on the vast swathes of the country’s northwestern territories.

On Monday night, bandits bombed a train station travelling between Abuja to the central Kaduna city, leaving many killed, wounded and abducted.