Fraud: Bring Abba Kyari Out From Prison And Hand Him to US – Man Tells FG 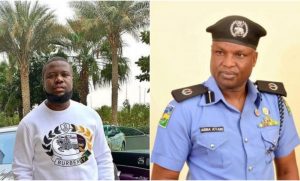 The Nigerian government has been told to remove suspended DCP Abba Kyari from prison and hand him over to the United States.

A Facebook user, Princewill Chimezie Richards made the call on Thursday.

According to him, Kyari ought to be in the United States not in Nigeria answering for fraud charges.

He wrote: “Bring Abba Kyari out from prison and hand him to the United States. That’s where he ought to face trial, he is feeling at home,”

Recall that Kyari was ordered to be thrown into Kuje prison by a court this week after he was caught by the National Drug Law Enforcement Agency (NDLEA) engaging in drug trafficking.

He is also wanted in the United States after FBI accused him of being complicit in the $1.1 million money laundering scheme spearheaded by Ramon Abbas, also known as Hushpuppi. 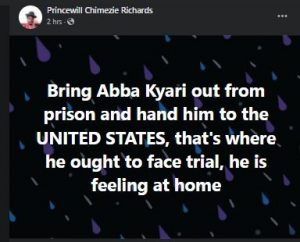