Oh No! Pupil Dies, 14 Others Injured As Fire Guts School Bus In Ondo 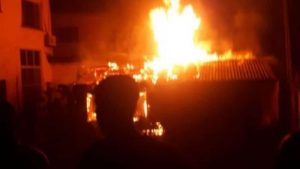 “In what will come across as a really startling development, a pupil of a private school in Akungba Akoko, Akoko South West Local Government Area of Ondo State, was killed while 14 others sustained serious injuries after their school bus was gutted by fire, according to Vanguard.

The ugly incident which caused anxiety in the agrarian community, according to an eyewitness account occurred at about 8 am as parents ran helter-skelter when they learnt of the fire incident.

Vanguard gathered that the deceased later died in his parents resident after being rescued from the fire incident.

Others that sustained serious injuries were rushed to the state general hospital in Iwaro Oka.

The source said that the driver of the bus noticed the fire after picking up the pupils from their homes and heading to school.

He said, “lt was when people noticed smoke in the sky that they ran towards the area, they later discovered that it was a school bus that was gutted by fire and that the pupils were inside the bus.

“Though no life was lost to the incident, we heard that those injured were immediately rushed to the hospital.

Odunlami said ” The children are in the hospital but information has it that one of them passed on in his parent’s house.