Shock As Son Hacks His Own Father To Death In Ogun 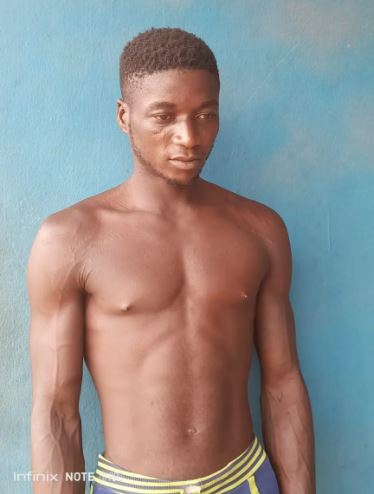 He was nabbed by the Police in Ogun State for allegedly killing his biological father, Mumuni Ibrahim.

The suspect was arrested following a complaint lodged at the Onipanu divisional headquarters by one Abiodun Sunday, identified as a neighbour to the deceased.

The complainant reportedly told the police that the victim, who was a security guard, had returned home in the morning and met his son, sleeping.

The father reportedly questioned the son why he was still in bed at that hour of the day.

The son was said to have become upset, as he grabbed a machete and hacked his father on different parts of the body.

The police spokesman, Abimbola Oyeyemi, told journalists on Saturday in Abeokuta that following the report, the DPO of Onipanu division, CSP Bamidele Job, quickly mobilized his men and moved to the scene where the suspect was arrested.

He said the team equally rushed the victim to a general hospital for treatment but later passed on.

Oyeyemi said the police “strongly suspect” the son to be a cultist, saying he “has no reasonable explanation for his action when interrogated.”

Oyeyemi quoted the Commissioner of Police, Lanre Bankole, to have ordered the immediate transfer of the suspect to the homicide section of the State Criminal Investigation and Intelligence Department for further investigation and diligent prosecution