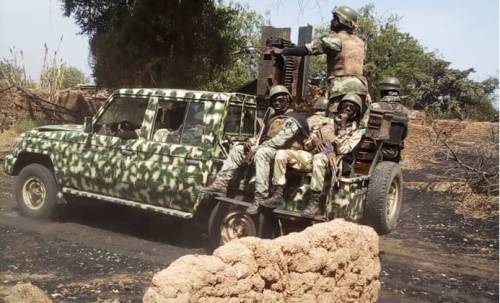 According to ABEG.NG two Nigerian soldiers were on Saturday killed after a military convoy struck an improvised explosive device along the notorious Abuja-Kaduna Highway.

The incident, it was gathered also left several soldiers injured.

They were said to be on a mission along the Abuja-Kaduna when the bandits’ attack occurred.

The military authorities have deployed several soldiers to the area to locate and possibly rescue passengers abducted by terrorists, who attacked the Kaduna-Abuja train last Monday.

About eight persons were killed during Monday’s attack, while an unknown number of victims were abducted by the attackers, who caused the train to derail after blowing off the rail tracks.

Over 390 persons were onboard the train, which was Kaduna bound.

This is not the first time Nigerian soldiers would suffer an attack in the hands of bandits along the axis.

On Monday night, about seven soldiers were killed along the axis.