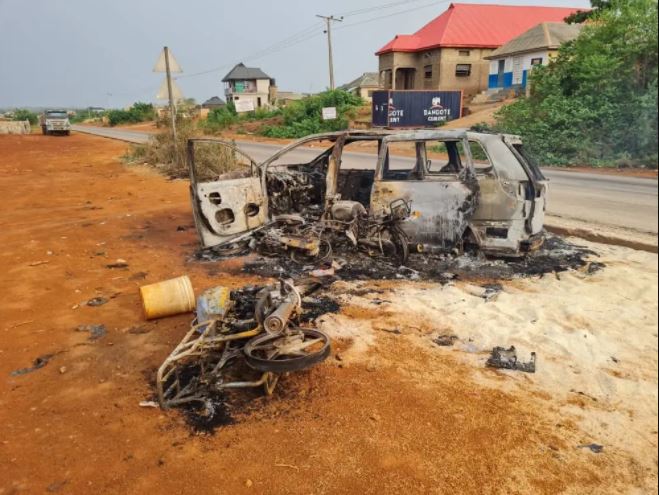 It was serious pandemonium that broke out in Itori, Ewekoro Local Government Area of Ogun State, when youths went on rampage following the killing of a commercial motorcyclist by a suspected smuggler, Daily Trust reports.

The suspected smuggler reportedly being chased by operatives of the Nigeria Customs Service, rammed into the motorcyclist, on Friday.

The motorcyclist popularly known as Okada rider died on the spot, according to eyewitness.

This, sources said, led to pandemonium as youths at the scene of the incident went on rampage, setting properties on fire.

The violent youths invaded an hotel where operatives of NCS usually lodged, destroying properties, while other vehicles were burnt in the melee, which affected traffic on the old Lagos-Abeokuta highway for almost an hour.

The Ogun State Police Public Relations Officer, Abimbola Oyeyemi, confirmed the incident on Saturday, saying 13 suspects were arrested in connection with the attack.

He said some of the properties destroyed belong to the “innocent” residents.

Oyeyemi said, “The suspects were parts of those who went on rampage when a smuggler’s vehicle who they believed was being chase by men of Nigeria customs knocked down a motorcycle rider and the victim died instantly.

“The hoodlums immediately went berserk and started vandalizing vehicles of innocent passerby. After setting ablaze some vehicles, the hoodlums moved to a popular hotel in the area where officers of Nigeria customs used to lodge and started looting and vandalizing the hotel.

“Immediately a distress call was made to the police, the commissioner of police, CP Lanre Bankole, deployed men of special squad to the scene to collaborate with policemen from Ewekoro and other adjoining stations to bring the situation under control.

“On getting to the scene, the hoodlums who attacked the policemen by throwing stones at them were eventually subdued and thirteen amongst them were apprehended.

“The commissioner of police who was at the scene for on the spot assessment has vowed to make example of those arrested for others to know that it is barbaric to take laws into ones hand.

He, therefore, directed that others who took part in the dastardly act must be hunted for and brought to book.