Gunmen Abduct Policeman And Two Others From Ogun Mosque 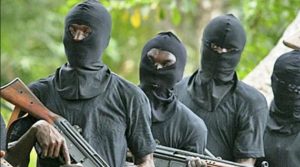 “Gunmen have abducted an Inspector of Police alongside two worshippers in a mosque at Soyoye in Abeokuta North Local Government Area of Ogun State.

The Police officer, Inspector Kamarudeen Bello, who is also the Chief Imam of the Mosque was kidnapped four days after his wife gave birth.

A source told ABEG.NG that the abductors had contacted the families of the victims, demanding N5 million ransom for each victim. The kidnap victims have now regained freedom after payment of the ransom.

The source told the publication;

“The wife of Inspector Kamarudeen was contacted with the phone number of one of the kidnapped victims.

“I don’t know how much each of them paid, but I think the police Inspector parted with about N700,000 before he was released.”

When contacted, the Police Spokesman, Abimbola Oyeyemi, confirmed the abduction and release of the victims on Sunday. Oyeyemi, however, said he was not aware if any ransom was paid.