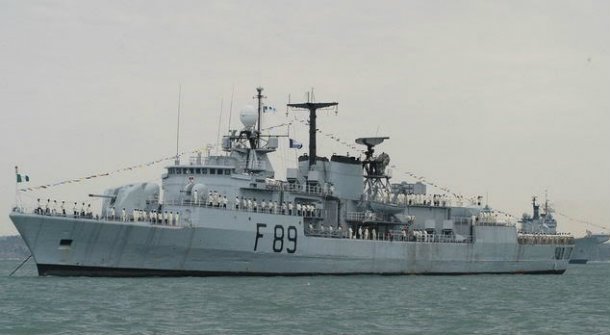 The Nigerian Navy has arrested a ship, Motor Tanker (MT) HEROIC IDUN, owned by Hunter Tankers AS, domiciled in Scandinavia, Norway, for illegally trying to lift crude oil in Nigeria.

Naval Chief of Policy and Plans (CPPLANS) Sa’idu Garba, a rear admiral, made this known at a press briefing on Friday in Abuja.

According to the Navy, MT HEROIC IDUN entered the Nigerian maritime environment and headed for Akpo Field without any form of authorisation or clearance by the NNPC.

The CPPLANS revealed that the ship arrived Akpo Field midnight on 7 August with the obvious intention of lifting crude oil within the field illegally but was stopped by the Nigerian Navy Maritime Domain Awareness.

“The outcome of all relevant enquiries from the controlling agency, NNPC Ltd, revealed that the vessel was not cleared to be in Akpo Oilfield.

“This revelation necessitated the deployment of the Nigerian Navy Inshore Patrol Craft, NNS GONGOLA, to investigate the super tanker’s activities at Akpo on 8 Aug 22. NNS GONGOLA arrive Akpo Oilfield and interrogated MT HEROIC IDUN, asking critical questions including her mission and approval status to enter Akpo Field among others,” he said.

He also revealed that the ship was later arrested at a location in Equatorial Guinea after a pursuit on the sea.

The Nigerian maritime domain plays host to several maritime economic activities and is noted to have high maritime traffic in the Region. In order to enhance security of the maritime domain, the Nigerian Navy monitors the activities of sea farers and takes appropriate action to avert all forms of criminality including illegal bunkering, piracy illegal unreported and unregulated fishing, (IUUF) and crude oil theft among others. While conducting routine monitoring of the maritime domain, on 07 August 2022, it was observed that a very large crude oil carrier MT HEROIC IDUN entered the Nigerian maritime environment and headed for Akpo Field without any form of authorisation or clearance.

MT HEROIC IDUN (IMO: 9858058) is registered in Marshall Island with an overall length of 336-meter and capacity of barrels. The vessel arrived Akpo Field midnight on 7 Aug 22 with the obvious intention of lifting crude oil within the Field, albeit, illegally. This was, however, spotted by the Nigerian Navy Maritime Domain Awareness facility which probed the legitimacy of the Very Large Crude Carrier’s presence in the Total SA operated Akpo Field. The outcome of all relevant enquiries from the controlling agency, NNPC Ltd, revealed that the vessel was not cleared to be in Akpo Oilfield.

This revelation necessitated the deployment of the Nigerian Navy Inshore Patrol Craft, NNS GONGOLA, to investigate the super tanker’s activities at Akpo on 8 Aug 22. NNS GONGOLA arrive Akpo Oilfield and interrogated MT HEROIC IDUN, asking critical questions including her mission and approval status to enter Akpo Field among others. The Captain of the vessel duly responded to the questions and further stated that MT HEROIC IDUN was without relevant clearance to operate in the Field.

Accordingly, the vessel was ordered to turn around and follow NNS GONGOLA to Bonny anchorage pending when she will be cleared for loading by NNPC Ltd. However, the Captain after contacting the Master/Shipping Agent refused to cooperate with NNS GONGOLA and stated that she had been told not to take directives from the Nigerian Navy Ship. Thereafter, she engaged full speed southwards towards the Sao Tome and Principe maritime area in a bid to evade arrest.

Apart from refusing lawful arrest, the Captain of the vessel made a broadcast of false piracy attack call to IMB Piracy Reporting Centre to mislead mariners that NNS GONGOLA was a pirate vessel and possibly concoct an alibi for her desperate action.

On the piracy alert the Nigerian Navy also through international collaboration alerted relevant piracy reporting centres through CRESMAO and ECOWAS ZONE F Cotonou headed by Nigerian Navy officers for the alert to be cancelled immediately which was done.

Permit me to mention here that Nigeria has not recorded any piracy attack in its waters in over one year. Hence, this mischievous act by the ship is clearly aimed at tarnishing the good image of the maritime domain of Nigeria, which we have worked vert hard to achieve.

The brazen act of defiance to constituted authority by the Captain of the vessel necessitated the Nigerian Navy to invoke the collaboration of neighbouring Equatorial Guinea through the Yaoundé Architecture to arrest the vessel as we noticed that it stopped making way in the Equatoria Guinea waters.

I must state that the Nigerian Navy surveillance facility was used to track and constantly update the Equatorian Guinea Navy on the location of the rogue vessel. The Equatorial Guinea Amphibious Ship, CAPTAIN DAVID was therefore vectored to intercept and arrest MT HEROIC IDUN on 12 Aug 22. The vessel is currently being held at the Luba Anchorage in Bioko Island, Equatorial Guinea where the country is conducting her own investigations while we await diplomatic procedures for handing over to the Nigerian Navy.

To set the record straight, MV HEROIC IDUN was inside the Akpo Oilfield designated guard zone in the nautical chart from 0006 – 1432 on 8 Aug 22. While inside Akpo field, MV HEROIC IDUN approached the Single Buoy Mooring between 1143 and 1208 at slow speed of about 3Kn, suggesting likelihood of commencing mooring operations but later aborted that motive and retreated outside the Field.

Clearly, she had not commenced taking product from the oilfield. It is also worthy to note that it has been the Nigerian Navy’s modus operandi to monitor crude oil tankers that approach loading terminals without necessary clearance, and effect arrest until the relevant agency approves their legitimate operation in order to avert crude oil losses adduced to theft. Such instance is the arrest of another vessel LNG Carrier, TRINITY ARROW, on 11 Jul 22, for loading LNG at the NLNG Terminal in Bonny without clearance from Nigerian Upstream Petroleum Regulatory Commission (NUPRC).

Upon NUPRC availing the Nigerian Navy with the requisite permit, the vessel was allowed to continue her operations. The NN wishes to enjoin the media, well-meaning Nigerians and well-wishers of the Federal Republic of Nigeria, to note the actual occurrence regarding MT HEROIC IDUN, and disregard rumours, mischievous and fictitious articles being circulated by enemies of the State, in a bid to cause chaos and discredit efforts of the Nigerian Navy.

The arrest of MV HEROIC IDUN and other such vessels engaged in illegal activities will certainly send a strong signal to other international criminal syndicates that the Nigerian navy is always on the alert to thwart their illicit dealings in stolen crude oil through persistent surveillance, prompt response and enforcement of national laws.

The Nigerian navy assures Nigerians that in with its statutory responsibilities and drawing strength from the strategic directives of the CNS, Vice Admiral Auwal Zubairu Gambo, the Service will maintain a posture of zero tolerance to crude oil theft and other criminal activities 9in our maritime domain. The Navy shall work synergy with other maritime stakeholders to ensure that Nigeria deserves maximum benefit from its natural maritime endowments.