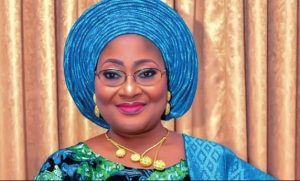 They were arrested in connection with the attack on the convoy of wife of Osun state governor, Mrs Kafayat Oyetola at Owode, Ede.

The command spokesperson, Yemisi Opalola in a statement obtained in Osogbo, said operatives were contacted at about 8:30pm on Friday that the convoy of Mrs Oyetola had come under attack.

She said, “Information was received that at Owode, Ede Market Express way, some hoodlums were attacking convoy of the First Lady. DPO ‘A’ Division Ede promptly mobilised and led the detectives to the scene, where they met CSP Dauda Ismail, the CSO to His Excellency (Adegboyega Oyetola), the executive governor of Osun State.

“He stated that one Omolola Opeyemi ‘M’ of Ijebu Ode, a driver of one truck without reg number blocked the movement of the First Lady, as a result of the traffic blockage.

“The driver was wounded on his forehead while some hoodlums took advantage of that and started stoning vehicles in the convoy that got one DSS personnel wounded. However, five suspects were arrested at the scene.”

Information Officer to the office of the First Lady, Oluwatunmise Iluyomade, also confirmed the incident, saying, “No life was lost in the incident. Some security personnel attached to the convoy sustained various degrees of injuries.”

Meanwhile, the Peoples Democratic Party in Osun state, has accused the office of Mrs Oyetola of attempt to cover up the conduct of her escort who “beat up a truck driver at Owode, leading to public angry reactions against her entire convoy.”

A statement by the party’s spokesperson, Oladele Olawabamiji, obtained in Osogbo on Saturday, stated that an eye witness account has it that the affected truck had developed fault at the middle of the road with the driver making efforts to get it to work.

“That was the point the First Lady’s convoy arrived the scene and instead of helping to clear the traffic hold up , the security operatives around the First Lady pounced on the truck driver, beating him to a state of stupor.

“Realising the outcome of their criminal misadventure, the operatives rushed the driver to the hospital after the former had slumped. It was at this point that people around the market angrily reacted, pelting the convoy with stones and others,” he said.

The party called on the First Lady to apologise to the truck driver for the in-human treatment.

“Instead of blaming the PDP, we call on officials of the outgoing government to be mindful of their interface with the people of Osun state,” Oluwabamiji concluded.