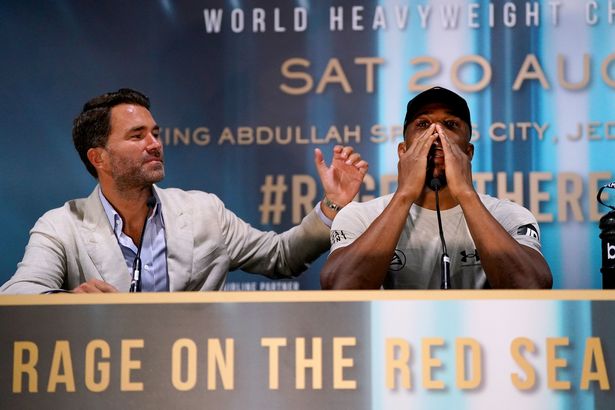 Anthony Joshua tried to hold back the tears as he addressed the media following his latest defeat to Oleksandr Usyk.

Joshua lost to the Ukrainian for the second time in 11 months at the King Abdullah Sports City Arena in Jeddah.

The 32-year-old delivered a much-improved performance but was still outpointed by Usyk.

Joshua struggled to find the words to express how he was feeling during his interaction with the media.

‘I tried a different style,” he said.

Joshua was then asked if he was proud of himself, to which he replied: “It’s hard to say I’m proud of myself, I don’t feel anything, I’m upset, deep down in my heart.” At that point Joshua pulled his cap over his eyes and was unable to speak as promoter Eddie Hearn took over proceedings.

When he had regained his composure, Joshua added: “When you lose, you’re ultimately not happy, it’s just upsetting. I wanted to win and I wanted to win for Great Britain because I knew how much they wanted me to fight Tyson Fury. I’m not so happy with the performance because I didn’t win.

“I appreciate everyone watching at home, I’m a fighter, I’m not a normal person. Even though I try and hold it together, to be a fighter is to have a real different mindset and lifestyle.”