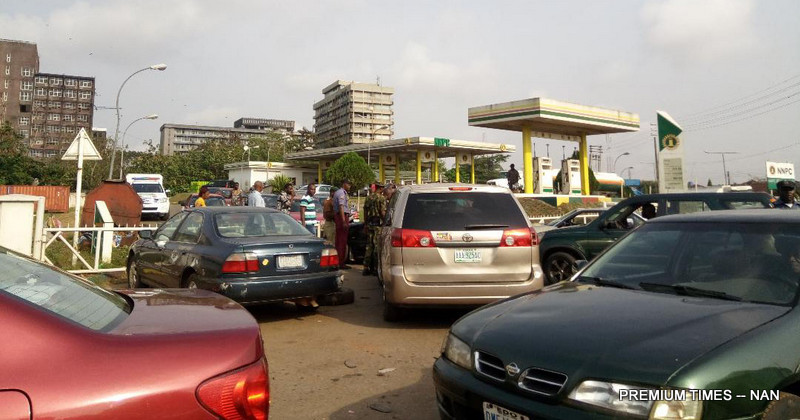 On Tuesday, a large number of filling stations were closed, which resulted in long lines of drivers waiting to purchase Premium Motor Spirit, also known as gasoline, at the few locations in Abuja and neighbouring states that did so.
After a break of about a month, gasoline shortages returned on Tuesday in the Federal Capital Territory and its surroundings as drivers and other PMS users speculated about the impending end of fuel lines in Abuja.

The petrol scarcity and its attendant queues on Tuesday were due to the warning strike embarked upon by the Suleja Depot Branch of the Independent Petroleum Marketers Association of Nigeria.

The oil marketers commenced the three-day warning strike on Monday and stopped their members from lifting petrol from the depot to more than five states in the North including Abuja, a development that caused scarcity on Tuesday.

The two ever-busy filling stations, Conoil and Total, located right in front of the headquarters of the Nigerian National Petroleum Company Limited, shut their doors to customers on Tuesday.

Reason being that they had no product to dispense. However, black marketers in front of the filling stations and opposite NNPC headquarters, used the opportunity to sell their wares at higher rates to motorists.

Government officials kept mute about the situation when contacted.

The spokesperson of the Nigerian Midstream and Downstream Petroleum Regulatory Authority, Kimchi Apollo, for instance, did not answer his telephone when contacted. He also did not reply a text message sent to him on the matter.

The ABEG.NG reported on Tuesday that Abuja, Kaduna, Nasarawa, Kogi, Niger and neighbouring states might encounter another round of PMS scarcity following the commencement of a three-day warning strike by the Suleja Depot Branch of IPMAN.

Members of the union commenced the strike on Monday in protest against the continued indebtedness of the Federal Government to oil marketers with respect to the payment of fuel transportation costs, otherwise called bridging claims.

The IPMAN Suleja Depot Branch Chairman, Yahaya Alhassan, said marketers had stopped the supply of products from the depot, as the union had prevented trucks from moving PMS to the northern states.

He said marketers were withdrawing their services until the Federal Government settled their outstanding bridging claims of N50.5bn.

He said the three-day warning strike would go on if the Nigerian Midstream and Downstream Petroleum Regulatory Authority fails to remit the money.

“At the expiration of the warning strike on Wednesday, if they (NMDPRA) fail to pay us, the stoppage of supply would continue indefinitely,” Alhassan stated, adding that all the appeals which the association made to the authority to pay the debt had been ignored.

In a similar development, the National Executive Committee of IPMAN said on Tuesday that it had been informed of some series of unwarranted attacks against members loading petroleum products across NNPC depots and private depots.

It said the attacks were within Rivers State “by group of disgruntled people using the army and police and claiming to be acting on order from above.”

IPMAN President, Debo Ahmed, said members of the association should be “kindly be informed that we have not authorised any body to harass or intimidate our members under the guise of levy collection.

“On behalf of IPMAN NEC, I direct that you withdraw your services anywhere you find them trying to execute this evil plot.”

Reacting to the development in a statement on Tuesday night, the NMDPRA said it held a meeting with the Northern Independent Petroleum Marketers Forum on September 5 and 6, 2022 with the participation of the NNPC Ltd.

It stated that during the meeting the authority informed the marketers that payment of their claims was ongoing and that over N103bn had been paid to marketers.

“Previous engagements and today’s meeting addressed issues regarding bridging claims and other matters,” it stated.

It added:-
“The authority would like to reiterate that payment of bridging claims is an ongoing process and payments are disbursed as it is received from marketers.